It’s been a while since we posted new pictures, but we can assure our friends in the U.S., in Italy, and within Albania that our construction is progressing well and fast…and our building’s façade is changing every day!  Who visits our physical site are in awe watching this building come up: an L shaped complex that now towers over its surroundings at the intersection of two main roads in a city center zone, known as ‘Tirana e Re’ (New Tirana).  This area was so named way back in the 1930’s when this city was beginning to expand its territory as the budding capital of the new Albanian Nation. 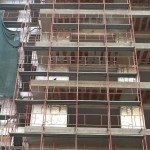 The 2 story building that was built on this site almost 80 years ago with great love and care by the Ivanajs as their residence (which they were not able to enjoy), is no longer. It was physically abused by foreign occupants during decades of wars and by Albania’s dictatorship during half a century of its isolationism from the rest of the world. It was finally released not too long ago to its rightful owner, but in no shape to be used again. In its place and, more importantly, on its own original parcels of land, a modern structure has now taken shape to include what will be the headquarters of the Ivanaj Foundations, which will feature and operate in a near future a cultural and educational center, rather unique in its kind for Albania.

As we indicated previously, the building is scheduled to be completed by mid 2016, and we are feverishly working with architects, engineers, and contractors to develop the many detailed plans for the functional setup of our premises, which we hope to officially open by the fall of next year. Meantime, we will do our best to keep you posted about our project plans’ progress as we go along. 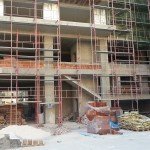 It is rewarding to see our dreams become the reality we wanted: to continue the work that the Ivanaj brothers initiated last century for the betterment of the country they dedicated their lives to, and that this work can take place right where it belongs, on their original property, where their still well revered name will continue to be an example to the younger generations.