The Library (past – present – future) 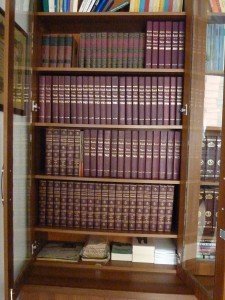 In the 1930’s Martin and Mirash Ivanaj built a priceless private library within their home in Tirana, since there were no public institutions of that type in Albania at the time.

Since they were students and over a period of years, the two brothers carefully collected and catalogued 16,600 books, mostly purchased abroad, and added 20 of their own personal manuscripts in a beautiful large room, especially setup for this purpose within their residence when it was built during 1936-37, in the newest part of town, still known to today as ‘Tirana e Re’ (New Tirana). Unfortunately, due to the ravages of WWII the Ivanajs did not enjoy for long the comfort of their new home and treasured library. The family was divided and forced to leave everything behind when their entire property was confiscated.

In 1945, after his return from exile, Mirash Ivanaj, who had lost his brother while abroad, found part of the original library’s content, but also what had remained got entirely lost after his arrest for political reasons in 1947. Some of what was left vanished due to pilfering, and the books  eventually made their way within the National Public Library of Tirana, when everything in the country was institutionalized by the Communist regime in 1950.

Some of the Ivanaj family documents, photographs, and the very large Albanian flag that was once proudly displayed at the Ivanaj home in Tirana, were saved, however, by Mrs. Giuseppina Ivanaj in 1939, when she was forced, with her baby daughter, Drita, to leave the family residence, which became the General Headquarter of the Italian Army that occupied Albania. They were stored initially in Italy and later preserved in New York for more than 70 years. Some of these family belongings were shipped to the Foundation’s Institute in Tirana only in recent times and the family flag, which was again temporarily hoisted at the Ivanaj grounds in Tirana when physical repossession of the property was finally obtained by Drita Ivanaj in 2009, is now permanently preserved and displayed in the ‘Salla Ivanaj’ of the newly constructed premises of the Ivanaj Foundations of New York and Tirana, officially opened to the public in October 2017.

A large batch of books, documents, and papers that Drita Ivanaj personally collected during her lifetime in the United States, was shipped by her to the Foundation’s Institute in Tirana during the planning stages of the new construction. The largest portion of this collection consists of business management, accounting, computing, system development, and futuristic publications, in addition to quite a variety of recorded seminars on similar topics, instructional videos, art publications, and a large musical records collection. Since then, additional books and materials in 3 languages (English, Italian, and Albanian) are and continue to be added to the assortment thanks to donations of local authors and residents. 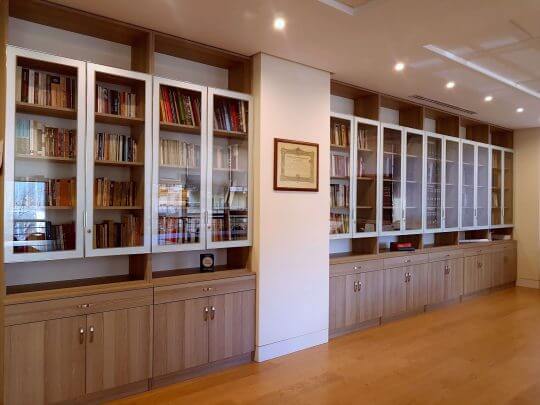 In the modern location of the new Ivanaj Library all these materials and collections have now found a secure and functional setting to be enjoyed by interested visitors of all ages and background and are at the disposal of anyone who wants to further his/her education, do research, make references, or even relax with music while learning. A desktop computer for public use is also available in these premises, in addition to Wi-Fi Internet facility for laptops or mobile phones hookup, as well as comfortable furniture and a quiet environment fit for studying purposes.