Just a peek and a preview.

Home/Blog, Cultural Preservation/Just a peek and a preview.
Previous Next

Just a peek and a preview.

In the legendary city of Prizren, where one of my ancestors (Leka Ivan) was an active participant in the historic League of Prizren assembly in June 1878, there is ongoing a book fair this weekend, and the Ivanajs are present again, this time with a book about them. 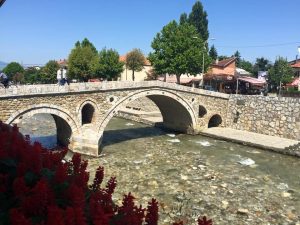 This 330 page publication is a labor of love by Jozef Radi, who is publishing several volumes of his father’s (Lazer Radi) works, and this is one of them. It contains also documentation about my personal meetings and visits to the Radis going back to the very early 1990’s, after Lazer Radi was released from prison. He had shared some of his 46 years of imprisonment also with my uncle Mirash Ivanaj, who died in it, 12 days before his expected release as a political prisoner.

This volume just got off the press and will become available also in Tirana soon. A special event is being planned to take place within the premises of the Ivanaj Foundations toward the end of September with a roster of distinguished speakers, and, at that time, signatures on the book will also be included.

More details to come in due time.