Revisiting a dear and familiar site

Home/Blog/Revisiting a dear and familiar site
Previous Next

Revisiting a dear and familiar site 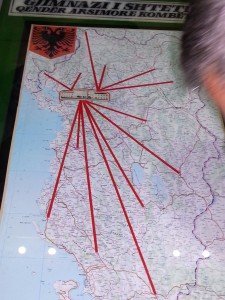 The Gymnasium “28 Nentori”, founded in 1922 in the northern city of Shkodra, became the 1st public institution that conducted higher education in Albania using the Albanian language. From it, others developed and spread throughout and it is currently still considered the 4th best school of its type in the entire country.

My uncle, Prof. Dr. Mirash Ivanaj, was one of its first teachers, from 1924 onward, in the fields of history, latin, ethics, geography, phys-ed, etc. and eventually its Director until the year 1930.

The picture of the first graduating class in 1928 is prominently displayed in the ‘museum section’ of this school, which I visited for the first time in May 1993 to receive an award, bestowed upon him posthumously as “Martir i Demokracisë” (‘Martyr of Democracy’) by the President of the Republic of Albania, soon after the country opened up to the rest of the world and shed the dictatorship that oppressed the country for more than half a century.

His first award, when he was alive, was the highest one at that time, named after the national hero “Order of Skanderbeg”, while the others received in his memory include the one as “Mësues i Popullit” (‘Teacher of the People’), and the highest more recent one as “Nderi i Kombit” (‘Honor of Nation’). 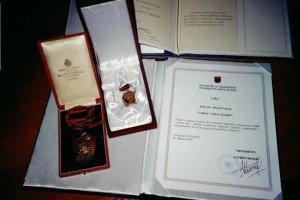 The newly refurbished building of this Gymnasium looks almost new notwithstanding its 93 years of existence that is preserved, for historical purpose, only in the original ceiling of its lobby’ entrance. 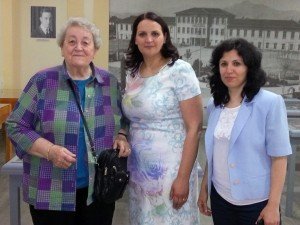 Accompanied by a Board member of our Foundation, I was received by the current directorship of two lovely ladies, right after some of the year-end exams had taken place in the morning.  Present was also a previous Vice Principal that I had met way back in 1993, who made me very emotional in recounting some past memories about my uncle’s history at the school. I was given a book of the school’s records that was just published this year, which, of course, will be placed in the Library of the Ivanaj Foundations when it will open next year. 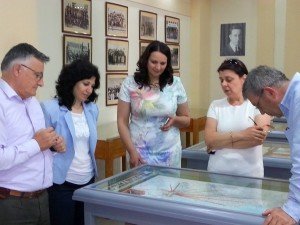 The weather could not have been better, and I wished I had more time to go around the city a bit. It has changed greatly since I saw it last. It is now an even mixture of very modern high rise buildings with some luxurious hotels along some avenues, and refurbished, tastefully repainted, and preserved 2-story old residences, that house a variety of quaint shops, flanking what is  now a complete pedestrian walk way with endless cafes in the mid aisle. Interspersed here and there, are gorgeously green, peaceful oases of city parks.

The whole city was a real and pleasant revelation to me! Rroftë Shkodra!

“Order of Skanderbeg”, and “Nderi i Kombit” (‘Honor of Nation’).