Home/Blog/Presidential visit and wishes
Previous Next 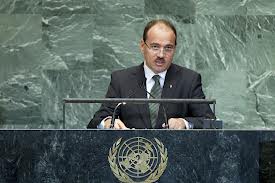 The annual General Assembly at the United Nations in September brings a vast amount of foreign dignitaries and visitors to New York City. This gathering provides the chance for a variety of foreign officials to make themselves heard by their peers and to touch base with their own Diaspora on American soil.

Albania had its own representative in town this past month, President Bujar Nishani, who was hosted by and visited a variety of Albanians in their own communities. Having previously met him at the Presidential office in Tirana, it was a pleasure to follow his activities during his recent stay in the United States.

One particular visit of his to the Albanian community in Michigan this week attracted my attention not only because I am closely related to it due to my family ties, but because it brought back pleasurable memories of one of my own experiences there a few years back.

In 2001 I was also invited by the local Albanian American Student Organization (AASO) to give a talk at Oakland University, and I remember wondering what could I have contributed to their knowledge. When I met my audience, mostly composed of graduating students in various faculties, who were born in the USA and never visited Albania, I realized their yearning to know more about their country of origin. As someone that has traveled there, twice yearly since the early 1990’-s, I had a lot to convey about the transformation I witnessed throughout the years.

President Nishani’s current visit in Michigan is well described by an article in “The Michigan Daily” entitled “Albania President talks pride in ethnicity”. The quotes however, which I took the liberty of transcribing below, really hit notes very dear to my heart: 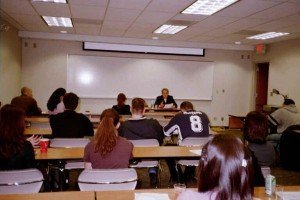 “My message was just to congratulate them for their achievement here,” Nishani said. “We have a very good and strong Albanian-American diaspora here in Michigan, a number which has increased year after year and most of them have been very successful in their life.”

“I have supported the objective and aims of the government to do a ranking of high schools and universities in Albania, but it must be transparent, it must be a real one and it must be considered by appropriate mechanisms and institutions.”

“He is pretty interested in Albanian students here and he obviously wants us all to go back and be involved with Albania,” Egli Lika, Engineering freshman and a member of the AASO said.

The above sentiments and comment are completely attune to the Ivanaj Foundations’ mission and goals, which, in a not too distant future, will be able to develop and expand activities in its new quarters in Tirana, now under construction. There, not only we will be able to host all sorts of projects currently being planned, but we will also be in a position to welcome all kind of expertise, national and international, through our business and lodging facilities.

We need and sincerely hope that our future plans will attract a variety of support and participation not only from other organizations, but from the younger generations of Albanians that have obtained exceptional education abroad and would be willing to share it within their native country as well.  Anyone interested can stay tuned to our news and contact us here for further information.