Clean Albania In One Day

Home/Blog/Clean Albania In One Day
Previous Next

Clean Albania In One Day 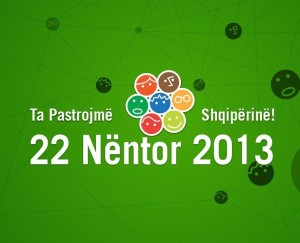 “Clean Albania In One Day”, that was the theme for November 22nd when a total of 147,000 volunteers throughout the country gathered in an organized fashion to pick up trash that littered city streets and the countryside as well. This was in every sense of the word, a historical event! At no other time in its history had so many people come together through their own free-will, determined to work towards one cause: make Albania a cleaner and healthier environment to live in.

Most of the volunteers were (high school and University) students, who skipped classes in order to clean their streets. Some of them were also encouraged to do so by their own teachers. Even Prime Minister, Edi Rama, and the Minister of Environment, Lefter Koka, were seen holding waste bags in their hands and cleaning up the streets of Tirana. Proudly, amongst the thousands of volunteers were the Ivanaj Foundation staff as well, who contributed by filling 10 black trash bags and properly disposing of them in the designated areas.

After a long and exhausting day, volunteers were feeling especially happy and optimistic; the look was written across their faces. Through this initiative they helped change the culture of indifference that had been plaguing Albania for too long. These volunteers proved that Albanians do care about the environment and they will work to make change happen.

Perhaps the greatest lesson to be learned from this day is that prevention is the key to a healthy environment. It takes a second to throw one’s rubbish on the street, but it takes thousands of people and countless of hours to pick it back up. Hopefully having seen the many volunteers bending up and down for hours while cleaning up, will cause those guilty of littering to think twice the next time they find themselves in a position with trash in their hands and no garbage can nearby.