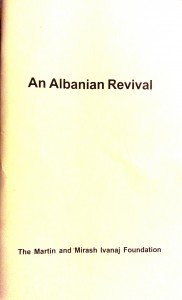 This book is a reprint of an historical document, which fortuitously came to light as the crisis of Kosova was unfolding in that region in late 1998.  It represents a speech delivered by Nikolla Ivanaj in Rome in 1911 and published a year later in Italy when Albania gained its independence as a nation. This publication has an introduction in English and Albanian and both the original and the Italian version of the document come provide a modern Albanian translation.

Nikolla Ivanaj’s speech to the Italian Press Association on January 26, 1911 is an historical document of vital importance even today.  The speech was written at the time of the uprisings in Northern Albania and the intensive diplomatic activity that led to the Proclamation of Independence of Albania in Vlora one year later.

In the author’s opinion, next to the Skenderbeg’ s glorious period and Ali Pashe Tepelena’s political leadership, the year 1911 was critical to the fate of Albania and Albanians.

Nikolla Ivanaj reflects objectively on the political reality of the time while outlining the contours of the national conscience. His analysis of the situation includes consideration of Albania’s borders, the opting for autonomy rather than full independence from the Ottoman Empire, the primacy of the national calling over religious feelings, and the continued efforts of the Albanian exiles for a national awakening. Written with vision and sharpness, the speech is an appeal for support and a cry for help, to Italy at that critical juncture.

To the historian, student or everyday reader, this speech will echo the resistance of the Albanians in Kosova, Montenegro and Albania, drawing from a blueprint for a national program.

As the new century begins, some of the questions Nikolla Ivanaj raised continue to resonate: “Will they (Albanians) find any friends among the free nations of the world and will they have the backing of the press and the public opinion? Is there a belief that Albania is deserving and capable of a better life, and a  truly free one? Hopefully, but even so, Albanians have understood that only through continuous sacrifices, without expecting anything from any government nor diplomacy, they will achieve what they truly deserve.”

This speech will help contemporary Albanians, or any reader interested in the socio-political history of the region, to think seriously about the state of Albania as Ivanaj saw it at the beginning of the last century, and how it relates to developments in contemporary Albania.